About Sultan Mehmed II.
About the University
About the Department of International Relations
FSMVU Strategic Plan
Novel Coronavirus COVID-19 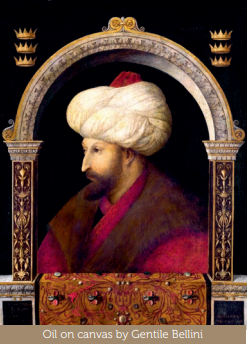 Mehmed II, also known as Muhammed bin Murad, Mehmed the Conqueror, and Fatih Sultan Mehmed (30 March 1432 - 3 May 1481), was an Ottoman sultan who ruled first for a short time from August 1444 to September 1446 and later from February 1451 to May 1481. At the age of 21, he conquered Constantinople (modern-day Istanbul) and brought an end to the Byzantine Empire.

Mehmed continued his conquests in Anatolia with its reunification, and in Southeast Europe as far west as Bosnia. Being a highly regarded conqueror, Mehmed is considered a hero in modern-day Turkey and parts of the wider Muslim world. Mehmed II introduced the word Politics into Arabic "Siyasah" from a book he published and claimed to be the collection of Politics doctrines of the Byzantine Caesars before him. He gathered Italian artists, humanists, and Greek scholars at his court, allowed the Byzantine Church to continue functioning, and ordered the patriarch Gennadius to translate Christian doctrine into Turkish. He founded many mosques and religious schools in the city, such as the Külliye of the Fatih Mosque. Mehmed II is recognized as the first Sultan to codify criminal and constitutional law, long before Suleiman the Magnificent; he thus established the classical image of the autocratic Ottoman sultan. His thirty-one-year rule and several wars expanded the Ottoman Empire to include Constantinople, and the Turkish kingdoms and territories of Asia Minor, Bosnia, the Kingdom of Serbia, and Albania.

Mehmed left behind an imposing reputation in both the Islamic and Christian worlds. Istanbul's Fatih Sultan Mehmet Bridge (completed 1988), which crosses the Bosporus Straits, is named after him. On his accession as the conqueror of Constantinople, aged 21, Mehmed was reputed fluent in several languages, including Turkish, Arabic, Hebrew, Persian, Greek, and Latin. In 1481 Mehmed marched with the Ottoman army to a new campaign but when reaching Maltepe, Istanbul, and the place was later called Hünkar Çayırı (Field of the Sultan) he became sick and after some days he died on May 3, 1481, at the age of forty-nine, and was buried in his Türbe in the cemetery within the Fatih Mosque Complex.